Sergo peaked through his small window looking down on the production floor. Thousands of handpicked workers danced around giant machines in a well cho reographed ballet all designed to make the weapons that would save many civilian lives. Yes they would take many enemy lives as well but they were still instruments of destruction.

Sergo interest in flight oddly did not include combat. In his heart he was fascinated by things that fly and not things that are used to shoot down things that fly. In fact it was offensive to him that there was a need to do such a thing. Flight was glorious. It was life as far as he was concerned yet he couldn’t bring himself to participate.

His injuries caused by his accident had instilled an overwhelming fear that he just couldn’t conquer no matter how hard he tried. He was physically paralyzed even seriously thinking about getting on any kind of machine that could fly. If he was tied up and carried on to a plane he was sure his heart would stop long before he reached the doorway.

No, he would never fly. He could however, make things that prevented others from flying over the motherland and dropping bombs. For whatever reason he could naturally see a problem and come up with a most logical solution. What he had always lacked was a way of communicating those solutions and the power to implement them. Now he had them.

His memos were read by Stalin and Stalin had the power to make his ideas a reality. It baffled him as I’m sure it baffled Ford and Edison when others could not see the wisdom that was placed in front of them. People who struck to the old ways and just could not see the future. He was not a visionary or an inventor but he could see when someone had a good idea and how to use that idea to great advantage. I guess that was his talent. Taking great ideas and putting them into action.

The captured German scientist were a great source of this kind of content and the American and British industrialists were great sources of what works and what doesn’t. It’s really pretty easy for him to look at something that others have already done successfully and recreate those successes. I mean how hard is it to just copy what works and learn from what doesn’t work.

I was just luck that put him in this position. Imagine all those years ago if he hadn’t attended that horrible party and Stalin had not spotted him hiding in the corner. For once his lack of social skills and inability to be politically correct had not only saved his life but actually made all he had accomplished possible. For once his inability to lie or to deceive had actually made him successful. Quite amazing when you think of it which of course he did constantly.

Thank goodness Stalin saw him for what he was and not some kind of threat. He had seen what happens to people who are a perceived threat to Stalin. They simply disappear.

Take for example the idea of testing and using prisoners for production. How smart is it to just kill potentially useful individuals just because of their ethnic background or political beliefs. If a person is dexterous and nimble why not use them in some meaningful way instead of killing them. Feed them enough and have them perform a function that is meaningful. If you have to kill of useless mouths to feed well then kill off the fat fingered stupid ones. The ones who were too old or too ham fisted those are the ones who you discarded. Use the young males and females who test well for the proper jobs.

For the ones who show capabilities train them for more exacting tasks. I’m even considering holding classes for the ones who show promise in design or engineering. A great mind is a shame to squander. It’s not like these workers can cause any trouble with their ideas or political beliefs. They barely have time to eat and sleep and no contact with the outside world. As far as their relatives are concerned they are dead. Only their work keeps them alive and fed.

He did hate using the children. He had to because only their nimble fingers could accomplish some of the tasks demanded. Seeing them work day after day reminded him of after his accident. With only one good eye all his grandfather thought he was good for was menial tasks and shoveling dung. Luckily his Grandfather had died and his mother was able to get him back from the farm.

That reminds him it’s time to finish that last idea about another guidance system the British had developed. Sooner or later the enemy will discover just how the current system worked. This would be a tragedy and he had warned Stalin of such an event. This is why they could never use the system for anything but air defense over friendly territory. Just one unexploded warhead and NATO will be developing a defense. It won’t be hard to come up with a way to defeat the system once they apply themselves.

It was Beria’s idea to go ahead with the invasion even though we had nowhere near the amount of missiles needed to protect even our major cities. It was his idea to basically bluff the Americans and British into thinking that we had missiles everywhere. He was totally confident that his spy network would be able to give our forces 2 weeks notice of where the next target would be. With that kind of time to plan they could get the few missiles they had available in position.

How long this situation would last he had no idea. Beria said at least 2 more years. He personally doubted that. In the meantime all he could do try and develop the next generation. One possibility was to keep using the old German technology and as NATO fails to jam it they may decide to stop wasting their time and equipment and move on to other techniques then we could switch back and actually use the old radar guidance system from the Fritz. A desperate move but it might be worth a try. There was a small chance it would work. So in the mean time we will keep bombarding the jamming systems with signals we know they can easily defeat in the hope they will stop using the most primitive jamming efforts.

Believe it or not this was a hard concept to explain and Stalin had almost thrown him out of his office when he tried to talk to him about it. Luckily he had at least agreed to continue using the old radar and radio control systems. It really must be driving the enemy crazy. They must be positive that their efforts are capable of jamming the Soviet primitive attempts are working. Yet the missiles keep finding their targets. I would love overhear their scientists and engineers squabbling over solutions.
Posted by Harry Kellogg III at 7:44 PM No comments: 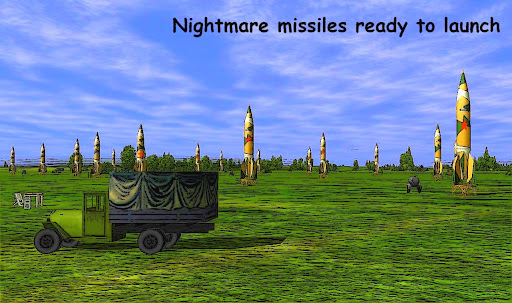 Posted by Harry Kellogg III at 4:06 PM No comments:

He didn’t know how many more 16 hour days he could take. They had been at it for 3 weeks and they were all running on empty. Just yesterday Collins had slipped and fallen under the wheels of that grader. Crushed his left foot and messed up his back. You just can’t work these long hours and not expect to have some major accidents.

The Soviet attacks weren’t expected until October. At least that was their stated deadline. That over flight last month was a wakeup call as to how this battle was going to be different than 1940. The Soviet planes were faster and had the range to reach all of the British Isles. A huge change in strategy by the RAF was in order. Yes they would know ahead of time when and where the Soviets would show up but what did it matter when they could blanket the whole country; a blanket bristling with guns and bombs.

Thank god they had no equivalent to the B29 or Lincoln. The Reds were masters of low level combat and no matter what the papers said about the Spitfires and Meteors advantage in speed and height the battle would be at low to medium altitudes. The Spit pilots were going to have to learn to boom and zoom in a Spit. Something they and the plane were not meant to do. You get into a turning fight at low level when your outnumbered you will not last long. Not according to his brother in law, the pilot.

These Reds were a different kind of animal than the Krauts. He mentioned something about a special anti-aircraft round that would take care of many a Red pilot. The Brit fighters were supposed to lay off the initial attacks and let the AA gunners do their thing because of the possibility of friendly fire problems. The plan was to catch them before they hit land and then mess with them as they egress. Some fancy word for heading back home to your base.

He was having many second thoughts about coming back to England and marrying Betty. Oh he loved her and all that but it sure would be safer in the good old US of A. It looked like the Brits were going to fight and at least that was a relief. But were in the hell were the Yanks? His countrymen were not stepping up to the plate and from all the newspaper reports they were having trouble finding enough guys to join up.

Yet every vet he knew was signing up again. I suppose I’m doing more good here getting these airfields ready again than going through boot camp and all that paper work. According to Ma all the neighborhood boys were signing up and had left already so he sure didn’t know where all this shortage talk was coming from. Maybe it was a propaganda ploy. If it was then where were they? They weren’t here in England that’s for sure.

Every night he got hell in the pub on the subject. “Where are your bloody Yank friends?”. He didn’t have an answer so he stopped going to the pub. Saved a lot of money but he missed the old days when everyone treated us like kings. No more though. The Brits were pissed at us for not coming to their aid.
Oh well that was way above his pay grade. All he could do is to hang on and do his best at his job. At least Betty was still the same girl he married and loved him. I guess that’s about all you can ask for in a war. He was home in bed every night, with a gorgeous women, who loved him and he loved her. Much better than the last time he was here. Before they were married he never got past 2nd base and then he had to go and fight in those god damn hedges.

Holly crap that Limey idiot is going to tip that crane over.

Man that was close. You just can’t lift something that big without the proper back fill on the base. I’m glad the CBs trained him well that could have been fatal.

“William get over here and fix the footing for Jack…Thanks mate.”

Thank god he’s not my mate. How does he chew his food with those teeth? I don’t see how he can close his mouth with those teeth pointing every which way. I should have become a dentist. I could be racking it in here. Maybe not they just seem to have them pulled. Modern dentistry is not a priority for folks fighting for their lives and freedom.
Posted by Harry Kellogg III at 3:59 PM No comments: