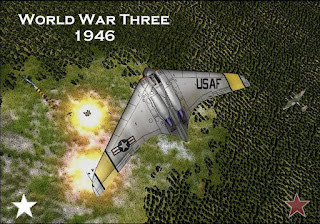 Posted by Harry Kellogg III at 6:29 PM No comments:

"The Phoenix" by Ranger Elite


The air was calm this morning, though it was a bit chilly out in the early dawn hours. Jack Northrop sat at the table in the hangar, reading yesterday's copy of Take-Off, trying to clear his mind for the upcoming test. It made absolutely no sense to be anxious about the the test flight of the YB-49, when he controlled absolutely everything that he could possibly control about the test already. He would just have to leave everything else in the very capable hands of his new partners, Walter and Reimar Horten, and Army Air Force test pilot, Lieutenant Glen Edwards.

As the Horten brothers and Lieutenant Edwards, along with their specially selected and stringently screened ground crew, readied the YB-49 'flying wing' bomber, which they named “The Phoenix”, Northrop would answer questions here and there, making quick calculations in his head. Though the aerodynamics of the aircraft might have changed, as has the propulsion method, it was still his baby, from top to bottom. Nobody knew this aircraft better than he, and now, the Horten brothers.

When Walter and Reimar Horten were first introduced to him by Lieutenant General Leslie Groves, former head of the Manhattan Project, now the head of Special Projects for the War Department, 'The Phoenix' was then known as the XB-35. It was an extraordinary airframe design, using fairly ordinary pusher piston-engine propulsion, delivering inconsistent and unstable results. As a matter of fact, his 'flying wing' design was based, in part, on the Horten brothers' wing-glider experiments of the late 1930's, and he was honored to be working with them, in spite of their ideological differences. No matter what anyone thought, this was a battle for survival. This wasn't just a battle for ideological supremacy.

When the Army brought Northrop the Hortens' late war experimental airframe, it was a goldmine of information, especially as the brothers explained fully in detail every single aspect of the aircraft. More than that, Northrop was really impressed by their ability to recreate the blueprints completely from memory. All of their flying wing airframes were meant to mount jet engines internally, but using the admittedly inferior wartime Junkers Jumo 004b turbojet severely limited the design's capabilities. So, when they witnessed the record-setting test flight of the XP-86, they began lobbying General Groves to procure a dozen of the fantastic experimental turbojet engines. After a radical redesign of the XB-35 airframe to incorporate Horten design features, and to accommodate four jet engines, the first prototype was ready for its maiden flight, only six weeks after work began.

All the pre-flight checks were proceeding smoothly and the aircraft tug had just arrived to bring the big bomber out to the flight line. As the tug was hooked up to the nose wheel strut, and began pulling it out of the hangar, everyone present got a sense of how big it really was. Being moved along the flat out-spread tarmac, it formed a tall squat sprawling figure, thicker near the cockpit and narrowing to a razor's edge in the rear, with the vertical control surfaces of the original designs having been removed in redesign. Out of an abundance of caution, Lieutenant Edwards was ordered to wear one of those new-fangled pressurized flight suits and a flight helmet, which made things a bit more cumbersome for him as he entered the aircraft, climbing up through a forward hatch in the belly, using an integral ladder built into the hatch cover, and quickly settled into the cockpit, and began conducting the final pre-flight check, before slowly powering up the engines and taxiing down the runway.

Jet engines whining loudly, the Phoenix began to slowly roll down the runway, picking up speed as it chewed up tarmac, and lifted off about two-thirds of the way down the 5,000-foot path. The aircraft appeared to effortlessly climb high into the sky, making seamless tight banking turns, to fly its test course. Northrop's research staff began receiving radio telemetry on speed, altitude and direction, taking copious notes, and monitoring any radio traffic from Lieutenant Edwards. Everything looked good.

Unlike the XP-86, there was no expectation that YB-49 would be going supersonic: despite having four times the thrust capacity of the fighter, the bomber would be seven times the jet fighter's weight, fully loaded, regardless of how maneuverable it was. The phone rang in the hangar. It was the control tower. They were having trouble tracking the bomber on radar. If not for its radio beacon, they would not have known what to look for at all. Jack Northrop gave a puzzled look at his research team, and asked them what would cause radar difficulty in tracking the aircraft. They looked at each other and one of them offered their opinion: sections of the aircraft were built from layers of plywood, impregnated with a carbon solution, per the instructions of Reimar Horten, both to strengthen the plywood, and to lighten the aircraft weight. Reimar did happen to mention that this particular type of construction did cause radar anomalies during test flights, but they thought nothing of it, since German radar sets were notorious for their excessive back-scatter, due to inferior RF filtering technology. It appeared that this was not an anomaly at all, but a secondary effect of aerodynamics and construction that he could possibly capitalize on. Northrop immediately requested a copy of the film that was recording the radar screen tracking the Phoenix, along with copies of all of the magnetic voice recordings of the events occurring in the control tower during the test flight. He knew that General Groves would relent, once Northrop explained to him the importance of the discovery he may have made, and consideration of its use on future aircraft and the possibility of negating the early warning advantage imparted by radar. The fact that the YB-49 prototype aircraft had made a successful maiden flight was now secondary.

Northrop called Reimar Horten over, and let him know what was going on and what his current thinking was. Horten did not seem very surprised, but was very enthusiastic, interested in helping Northrop find and exploit this radar anomaly. As far as they were concerned, the Phoenix was not only the culmination of a radical new bomber design, but a testbed for a potentially revolutionary new technology. As the Phoenix landed, Northrop's research team swarmed over the flying wing, measuring EVERYTHING about the aircraft, prompting Lieutenant Edwards to ask what the big deal was. He didn't get an answer from Northrop, or the Hortens. But he was smart enough to know that whatever it was, it had to be big, especially to rate this much attention.
Posted by Harry Kellogg III at 6:28 PM No comments:

"Reversal of Fortunes" by Ranger Elite

1400
Office of the Commandant of the
United States Marine Corps,
Marine Barracks at Eighth & I Streets,
Washington, D.C., U.S.A.

Colonel James Roosevelt entered the room and removed his cover, standing straight at attention “Reporting as ordered, Commandant!” “Please, have a seat, Colonel” he was directed by Lieutenant General Alexander Vandergrift to the uncomfortable-looking chair before his desk. “Do you have any idea why you've been called directly to the Commandant's office, Colonel Roosevelt?” asked Vandergrift “No, sir. I was not told why my presence was requested, only that it was, Commandant.”

An uncomfortable look passed between them, and finally, it came out: “You've been summoned here because you will be served a subpoena very shortly, to appear before the United States Senate's Un-American Activities Commitee. Son, you've been denounced by some of your subordinates and brother officers as a subversive, sympathetic to the communist cause. I want to hear it directly from you. I owe you that much, before I am forced to feed you to that particular pack of jackals.” A stunned look appeared across Roosevelt's face, and as quickly as the look appeared, it was replaced by the infamous poker-face, no doubt a trait he picked up from his father.

“Commandant, in my own defense, I cannot effectively defend myself against such spurious charges unless I know the nature of the grievance. At this time, for the record, I would like to tell you, sir, that even though, like my father, I support social reform, at no time have I ever espoused or supported the position of Soviet-style communism, nor the means that it uses to advance its cause.” Roosevelt takes a deep breath and continues “In fact, sir, I categorically repudiate international communism, and those who use it as a guise for their own cults of personality. Not withstanding, the fact that I have been associated with, and in the presence of, people who have admired this system, this should not be indicative of my own opinion, or frame of mind, in regard to the subject.” “That's quite a powerful statement on the subject, James. I want you to report directly to the Judge Advocate General's office at Quantico, to prepare your statements for the hearing. I want your testimony to be beyond reproach. We have two weeks until the hearing; can you be ready, son?” Asked Vandergrift “Gung-ho, Commandant” Roosevelt replied with a smile.
Posted by Harry Kellogg III at 6:14 PM No comments:


Just read that prices increased by 12% this year. My salary sure didn't  The way prices are going up, I don’t know if we’ll ever be able to save enough to buy that new radio. I looked at them again on my lunch hour. The salesman showed me the inside. It was full of glowing tubes. I was just wonderful. He told me that if one of the tubes burned out you just went to the hardware store and buy another. They even have testing machines to see if your tube is bad.

I don’t think the war bond drives are going very well. No one has the money to buy them. The cost of food is going up and the taxes have to stay high to pay for the war its kind of a no win situation. Plus there’s the fact that many just can’t see the sense in bailing out the French again much less the German’s. I’m sure we won’t let Britain fall. If the British navy and the US navy can’t keep the Reds on their side of the channel then nothing can. I just wrote “their” side. Already its starting to seep into our consciousness. “Their” side, not occupied France or Denmark or even Germany. How fast change becomes the normal. I’m going to work on that. Its not “theirs”. It belongs to the people of Western Europe and we have to give them the chance to choose once again.

Can you imagine being in occupied France? Once again occupied by a foreign power. I must be almost unbearable. I guess that’s why the guy DeGaul did what he did. He just couldn't take it anymore. Just couldn't see his country raped one more time.
Posted by Harry Kellogg III at 6:09 PM No comments: