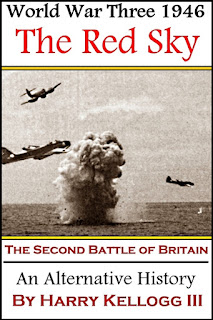 Once again a few brave men would be asked to do the impossible over the skies of Great Britain. This time the enemy was not lead by a buffoon in the form of Herman Goring. The Red Air Force VVS was led by a master of strategy in the form of one Alexander Alexandrovich Novikov, the man who ruled the skies over Mother Russia, Manchuria, East Germany and now most of Europe.

Sept. 1946 - Throughout the month of September the Soviet VVS feints and simulated massive air attacks on the Isles of Great Britain.

Sept. 1st, 1946 - The US Strategic Air Command or SAC, is created with Curtis LeMay named Commander.

Sept. 15th, 1946 - From two different direction massive air raids consisting of 2056 Tu2s, Lag 7s, Yak 9DDs approach the southern and northeast coast of the British Isles. The RAF is unsure of the Soviet targets. The targets are the “bone yards” and maintenance facilities of the British. The unexpected choice of targets and the effectiveness of the raids leave the RAF with very few serviceable fighter aircraft and few repair facilities.

Sept. 25th - The Second Battle of Britain begins. The VVS suffers from none of the constraints that the Luftwaffe encountered.

1. Using external drop tanks, the VVS planes have the range to hit every target in the British Isles.

2. They outnumber the RAF by five to one.

4. The Soviet spy network is in full play. There is no lack of intelligence on the exact location of targets and the effects of their previous raids on those targets.

5. The Soviets have used captured US jammers to spoof the vaunted “proximity or VT fuse”. During the first critical raids the RAF airbases are virtually defenseless.

The effects are almost immediate with the RAF on the losing end of the battle.

Within weeks the VVS is roaming freely over the British Isles and ravaging the transportation systems and storage depots of the RAF. Britain is virtually defenseless from air attack.

Sept. 30th, 1946 - The Soviets publish, in Pravda, an article and picture of what appears to be an intact atomic bomb from the Leningrad raid. The crew and the Silverplate B-29 appear to be in the background. The inference is that the crew and bomb have defected to the Communist cause.

Oct. 2nd - Four atomic bombs are dropped on the oil production facilities of the USSR. The B-29s were based in Egypt with their fighter escorts flying from bases in Turkey. These four bombs are the last of the atomic bombs in existence.

Oct. 18th, 1946 - William Perl, Joel Barr and Alfred Sarant have all defected to the USSR and bring with them unimaginable intelligence on American and British weapons systems.

The Soviets attention is diverted, and the Second Battle of Britain and the Battle for Iberia are severely curtailed. Stalin and the Stavka prepare for an invasion of Turkey, Iraq, the oil fields of Kuwait and the Levant. Their ultimate goal is to capture Egypt and Gibraltar.
Posted by Harry Kellogg III at 8:27 PM