They were using an appropriated Soviet GAZ 51 according to Sergeant William Summers (yes, he had decided to learn their names) and he was fascinated with the vehicle. It looked like the Lend Lease Studebaker US6 that was so prevalent in the Soviet arsenal. Yet it was obviously Soviet made and not that badly done according to the Sergeant.

The GAZ wasn’t quite as good as a Detroit made truck but it beat sure beat walking. Truth be told, it was not such a bad copy. The unit they had obtained the truck from had not survived the encounter. No one in the group of Americans and Turks could read Russian, so the documents they obtained from the truck were of little use. The truck had belonged to a Soviet headquarters unit. It was filled with what was probably useful information if they could eventually get it the documents into the proper hands. They just had no way of knowing how valuable this stuff was. The Captain decided to find a Turkish HQ unit to get rid of the papers.

They had decided to obtain the truck when they noticed that there was no air activity. Both the Turk and Soviet planes has not been seen for a good day. They figured that the Turks were relocating backward and the Soviets were advancing their airbases which meant that, for now, it was safe to be driving and riding in a truck.

It was amazing, but no one on the Turkish side seemed to give their ride a second look. They shared the road with all sorts of other Russian equipment that was now being used by the Turks. You just ‘X’ed out the red star, and you were golden it appeared. Although they had outrun their air support, the Reds were still advancing at an alarming pace. The Captain had read a report on their advance into Manchuria against the Japanese in 1945 and one division size unit had advanced 500 miles in 11 days.

It was day 8 since the Soviets attacked and the group was about 10 km ahead of the lead elements of the attackers. They, personally, had walked, rode, or driven 320 km during that time. If his math was right, the Reds had advanced 40 km a day. Pretty impressive and bellied the idea that the Red Army was still using horses for transporting supplies.
The Soviets had huge herds of horses in their TOE, It turns out the horses were not for transporting supplies but were a vital piece of the Reds mobile warfare strategy and tactics called Deep Battle. These units were on the books and used similarly to what the US and GB would call a Mechanized unit. In the US Army, these units would be infantry riding to the frontline in trucks, who would then dismount and enter battle on foot.

The Soviets went one further. The horses actually rode into battle carrying their human soldiers to exploit any breakthroughs created by the units accompanying tanks. The concept was quite well thought out, he concluded. The leader of their (yes, they considered them their) Turks was a young fellow who had actually fought with the Soviets along with his younger brother and had witnessed these Mechanized Calvary Corps in action. Both brothers were assigned to some famous Turkish General’s staff and had been on an official state visit to the Soviet front-lines.

First, the artillery would soften up the enemy with guns and rockets. Then, embedded assault tanks would advance and take out most of the strong points and machine gun emplacements. It seems that horses and machine guns are not a good combination. Next, the infantry would expand the gap and secure the flanks. Lastly, the cavalry would charge through the gap carrying their human riders, along with supplies of ammunition, heavy machine guns, and light anti-tank weapons. 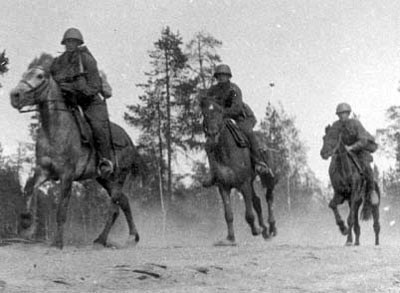 These cavalry units would exploit the breakthrough and advance as far into the enemy’s rear as they could, dismount, and take up a defensive posture until the other units caught up. This strategy lead to multiple enemy units being cut off and having to fight their way through these heavily armed, now on foot, classic infantry units in order to receive supplies or to retreat.

When he considered it from a purely military viewpoint, it was really quit brilliant. What better means of transportation could swiftly maneuver through a typical battle field battlefield better than a horse and rider? Once, the Reds were through the pocked marked moonscape that was the usual after a massive artillery barrage and tank assault, they were incredibly mobile and agile in exploiting the breakthrough. When and if they finally met with opposition, they dismounted and dug in like any classic infantry unit and waited for support. [i]

All those studies he had seen, describing the backward state of the Red Army had been based on the fact that they used so many horses. The deduction was bullshit. Those horses were a critical and very effective breakthrough tool, and not a sign of old school thinking or even a sigh of industrial weakness. They chose to use the horses not because they lacked trucks but because they just plain worked better at their version of the Blitzkrieg. And, according to the stories he heard and a battle they had witnessed up close and personal, it did work and work very well.

His personal encounter with a Mechanized Calvary Corps had occurred on day five of the attack. His group was placed in the rear guarding a headquarters unit. Just the kind of target the Soviet Mechanized Calvary Corps was designed to find and destroy. First, they heard the artillery barrage and Stalin’s organs laying down a massive creeping carpet of death. Then came reports of tanks attacking machine gun nests and other strong points. Soon, there were reports of the Red infantry riding tanks, mopping up, and exploiting the inevitable gaps in the line. Next, were hysterical reports of cavalry charges!

His small company of Americans started to laugh when they heard that. That cavalry charges were last done by the Poles against the Germans was common point of jest. Then Said got their attention. An interpreter explained, with quite explicit hand gestures, that this threat was to be taken seriously...very seriously.

And, sure enough within a half hour they were almost overrun by fucking Cassocks on horses. Truly amazing. They weren’t welding swords but had very modern rifles and assault weapons slung on their backs. Also, horses were carrying lots of ammunition, and even moving heavy machine guns and anti-tank weapons at an alarming speed. The exploitation phase wasn’t truly a charge. Once, the cavalry started to take fire, they dismounted and setup shop very efficiently while their follow up units started to flank us. The highly disciplined attack was quite frankly scary as hell, and in his opinion a brilliant tactic.

Now, his group was they in deep shit. They were in real danger of being surrounded by a much heavier armed and more mobile force. Their situation was very concerning to say the least. Luckily for them, the Soviet commander made an error and ran one of his units into a hidden machine gun nest that made a quick mess of both man and animal. It was a very unforgettable and unwanted scene, even for someone who hated horses.

This error created the escape route his group needed and also forced the cavalry to dismount and dig in. The cavalry just were not equipped, nor was it their mission to attack dug in emplacements. He concluded that this series of strong points and machine gun bunkers was, indeed, the only way to counter these “marauding vestiges of the past” (he liked using big and unusual words in his reports). He had no desire to be captured by the Soviets, and least of all a bunch of guys riding horses. So, they took the opportunity provided and hit the road. Their Soviet truck ran quite well and they were able to speed past the enemy before they had setup their defenses.

It turns out that Sargent Bill was quite a driver. The Captain remembered hearing about a former getaway driver for the Mob who was given the classic choice of jail time or the Army. This guy had made himself quite a reputation for stealing army vehicles and taking them for joy rides while drunk. It seems that even when drunk, he could out-drive anyone who tried to catch him. Finally, the officers just let him take the truck and bring it back when he was done. He was so valuable when he was sober that they looked the other way until the day he took the half-track down the Champs-Elysée in Paris.  The Captain thought that this might be the guy and his past finally caught up with him.  Now, he was a getaway driver for a bunch of misfits outrunning the Soviet army in Turkey. He guessed stranger things have happened, but he would be hard pressed to think of any. 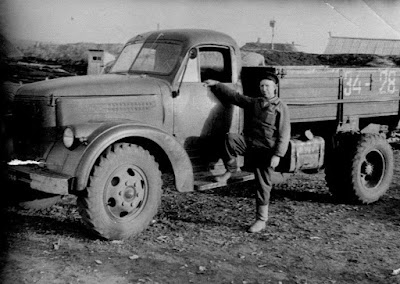